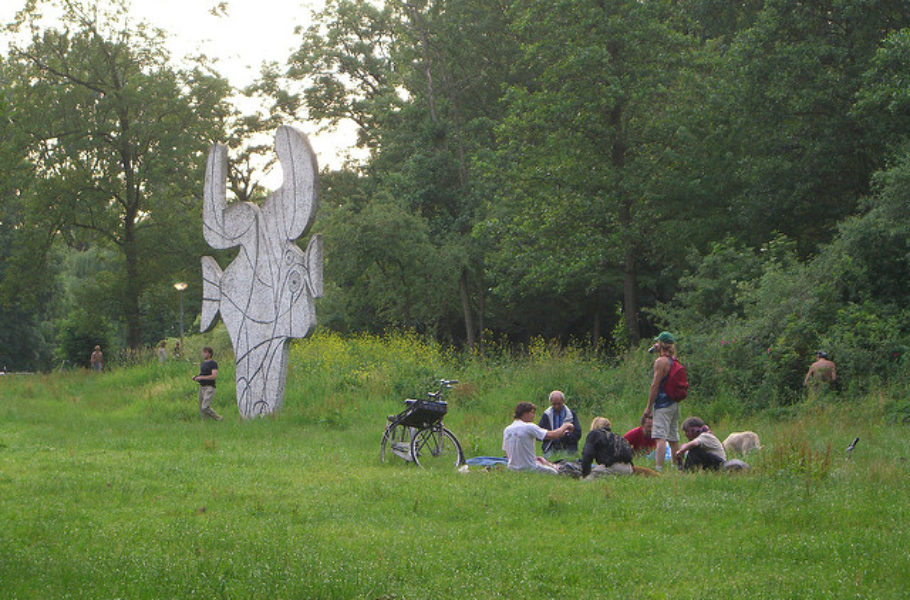 Sculpture of Pablo Picasso in the Vondelpark / It’s easy to walk right past this concrete sculpture at the southern end of the Vondelpark without realising that it is, in fact, by Picasso himself. Created in 1965 as part of an outdoor sculpture exhibition to mark the 100th anniversary of the Vondelpark, the ‘Figure découpée l’Oiseau’ (‘The Bird’) was donated to Amsterdam by Picasso after the exhibition and has remained in the same spot ever since.

De Hollandsche manege / The centre of Amsterdam, at a location close to Leidseplein and adjacent to the Vondelpark, harbours a closely kept secret. An inconspicuous gate in the Vondelstraat opens up to the most wonderful of Europe’s few remaining town manages: the Hollandsche Manege (Dutch Equestrian School Museum). On entering this truly live equestrian museum one experiences the sensation of travelling back in time. This historical ambiance is the backdrop for a story about the history of the oldest riding school in the Netherlands. The world of horseback riding is brought to life here and it is displayed within its historical context. Carousel riding vividly re-enacts this history by showing off authentic costumes and classical horsemanship. Enter this wonderful world of horsemanship and you will surely have a truly astounding experience.

De Vondelbunker / The Vondelbunker was originally planned as a bomb shelter when the Vondelbrug was constructed in the 1940s. In the 1960s it became a nightclub known as Line 3 after the tram line that ran through the neighborhood. It then became known as Studio 7. It was a popular place for musicians to perform in the late 60s. At the time, Vondelpark was the hippie mecca of Amsterdam, with tons of people camped in the park, hanging out, doing drugs, having fun. Studio 7 was a key part of that time and bands like Pink Floyd regularly performed here. The Vondelpark was cleaned up in 1971 and a few years later the club closed down. During the Cold War (1946-1991) there were around 40 bomb shelters in Amsterdam, many under bridges like the Vondel Bunker. The Vondelbunker was meant to fit 2600 people. Hard to imagine if you go in there today! The Vondelbunker is now run by a team of volunteers as a counterculture meeting place. Come to the Vondelbunker for concerts, cinema nights, art exhibits, performances and dinners. Nearly all of the events have free entrance and they ask for a donation of your choice. Each Thursday there is a activist networking event at 9pm called KONTRA:BAR where you can meet likeminded people and some of the volunteers who work at the Vondelbunker. Check their agenda for the latest events.

’t NieuWE Diep / A hidden gem in the beautiful Flevopark with a nice terrace next to a little pond. This is an old distillery. They still have the boilers where they used to brew the Dutch gin. They serve all kind of special beers and nice snacks and of course all kind of jenevers (Dutch gins). No cars allowed! Only reachable by foot ore bike.

Zevenlandenhuizen / At the end of the nineteenth century the romantic desire for everything ‘far away’ and exotic dominated Dutch architecture. This movement took a remarkable form in the Zevenlandenhuizen. The architect of these seven houses, Tjeerd Kuipers, was inspired by seven European countries and their characteristic styles of building. This was unexpected of him as he was well known as a designer of reformed churches in the neo-Renaissance style.

NAP bezoekerscentrum / The NAP Foundation believes that it is very important that the history and future of the Amsterdam Ordnance Datum is preserved through education. The reference mark is a unique part of the national history of The Netherlands, important on both national and international levels. You’ll often hear that the city of Amsterdam lies below sea level, but it’s not until you see it demonstrated by giant tubes that the reality really hits home. At the NAP visitor centre (NAP stands for Normaal Amsterdams Peil – literally Amsterdam’s normal water level), you can see three glass tubes showing the sea level in different parts of the region – one of them reaching nearly five metres above ground.
With the help of a number of partners, the NAP Foundation has been able to establish a visitors’ centre about the NAP. The interactive exhibition brings the history and future of the NAP to life with imagery and sound. Visitors will experience how confusing it can be if they are unable to determine their own altitude. Social aspects of the datum are highlighted, as well as its international character. The exhibition offers enough enjoyment for both young and old and is available in English and Dutch.

Begijnhof / The Begijnhof is an enclosed courtyard dating from the early 14th century. Nothing survived of the earliest dwellings, but the Begijnhof, which is cut off from Amsterdam’s traffic noise, still retains a sanctified atmosphere. The Begijnhof was originally built as a sactuary for the Begijntjes, a Catholic sisterhood who lived like nuns, although they took no monastic vows. The beautiful houses overlook its well-kept green garden, include the Amsterdam’s oldest surviving house Het Houten Huis dating from around 1420. On the adjoining walls, there is a fascinating collection of wall plaques with biblical theme. Southern fringe of the square is dominated by the Engelse Kerk (English Church) which dates from the 15 century and possesses its original medieval tower. Houses in Begijnhof are still occupied by single women, so please respect their privacy and be quiet.

Torensluis / The Torensluis (tower lock) looks like an excessively wide bridge over the Singel. The reason for such a spacious set-up was the Jan Roodenpoortstoren (tower) which stood here until 1829. The prisons under the tower were recently restored and are now open to the public. They are also used to host exhibitions and events literally underground. The edges of the tower foundations can still be seen in the bridge’s pavement. The bridge features a statue of Dutch writer Multatuli, as well as the large, sunny terraces of Villa Zeezicht and Café van Zuylen.

Trippenhuis / In the city centre of Amsterdam there is the Trippenhuis. The Trippenhuis is a neoclassical canal mansion in the centre of Amsterdam. It was built in 1660–1662 for the wealthy Amsterdam weapons traders Louis and Hendrick Trip. Many references to weaponry can be seen on its facade. The Trip brothers made their fortune trading in arms, so the house features chimneys shaped like mortars, canons engraved on the facade and an imposing gunpowder grey exterior. The house was shared by the two brothers and literally divided equally. A bisecting wall can still be seen in the middle window.
The Trip House is opposite an extremely narrow house with a wonderfully ornate facade. Legend has it that the Trip brothers built it for their coachman after he exclaimed, “Oh my, I would be happy if I had a house that was only as wide as the front door of my master’s house.”

Jacob Hooy & Co apotheek / An original 18th century herbalists shop. Step back in time to this 18th century herbalists’ shop near Nieuwmarkt, opened in 1743 by a 21-year-old sailor’s son named Jacob Hooy. Harking back to the days when both tobacco and opium were considered remedies for illness, the shop still retains much of its original décor, including barrels, wooden drawers and a magnificent set of scales embellished with two entwined serpents. The small barrels were made to measure for the shop in the 1700s, and display the Latin names of the herbs and plants they contained.

Buddhist temple / Flanked by traditional Dutch buildings in the historical heart of the city, this magnificent Buddhist temple appears even more magical due to its incongruous surroundings. Tucked back slightly from the road behind a grand arched gateway, the golden-tiled temple is like a slice of Shanghai in the heart of Amsterdam. The interior is just as impressive and is open to the public on Saturdays when guided tours are available, some including a meditation session.

One of the first things that might strike you in Amsterdam’s Chinatown is the bilingual street signs. The first Chinese settlers in Amsterdam used to load and stoke the coals on the large passenger ships, which is why a prominent Chinatown sprung up near the old harbour. Once this industry vanished, the Chinese opened up shops and restaurants here. Today you’ll find the city’s best Chinese restaurants and shops right in the heart of Amsterdam’s old centre. And of course, it’s the place to celebrate Chinese New Year in Amsterdam. Over the years, this district has also embraced other far-Eastern cultures, so in addition to the Chinese influences, keep your eyes open for shops and restaurants featuring Thai, Japanese, Indonesian and even Tibetan delicacies.

Museum ons ‘ Lieve heer op solder’ / Tucked away in the heart of Amsterdam’s inner city lies a small marvel: Our Lord in the Attic Museum: a uniquely preserved seventeenth-century house from the Dutch Golden Age. Explore the narrow corridors and climb the stairs to historically furnished livingrooms, kitchens and bedsteads, leading literally to the highpoint of the museum: an entire church in the attic.

Little houses set in to the Park Plaza Victoria Hotel / When the owners of the Park Plaza Victoria wanted to build their hotel opposite Central Station in the late 19th century, the elderly owner of two tiny 17th century houses dug her clogs in and refused to sell up to make way for the developers. So they simply built the hotel around her. You can still see the little houses, which date from 1602, dwarfed by the grand 4-star hotel that envelops them. When you walk out of central station into the city centre of Amsterdam you can see them right away! They even made a Dutch movie about these houses called ‘ Publieke werken‘. 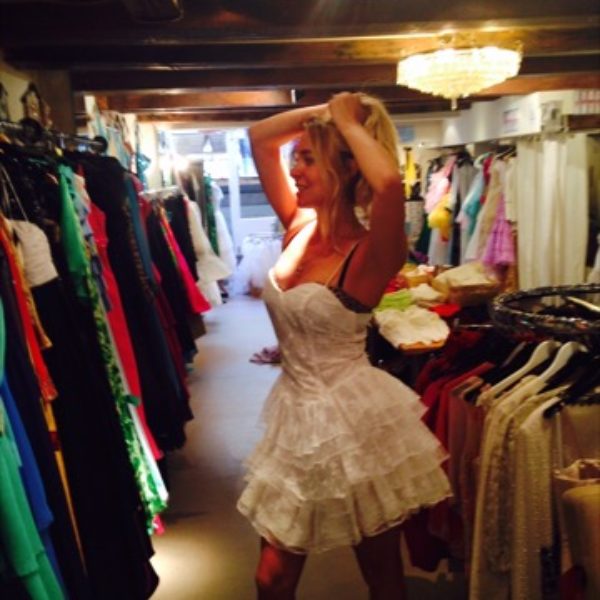 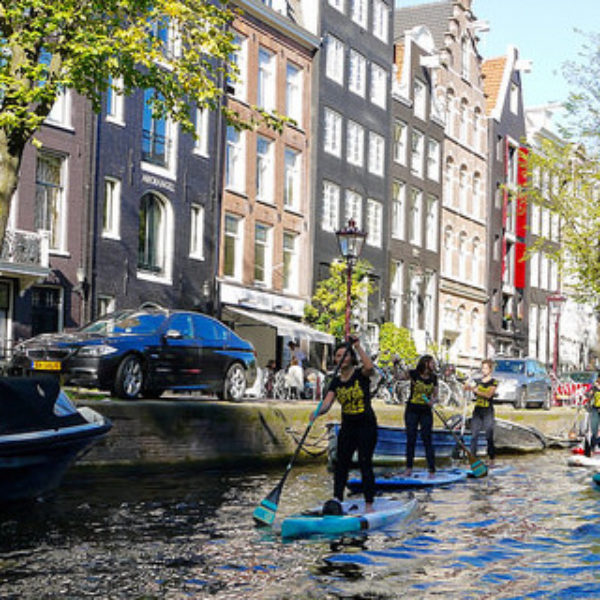 10 active and different fun things to do in Amsterdam?? 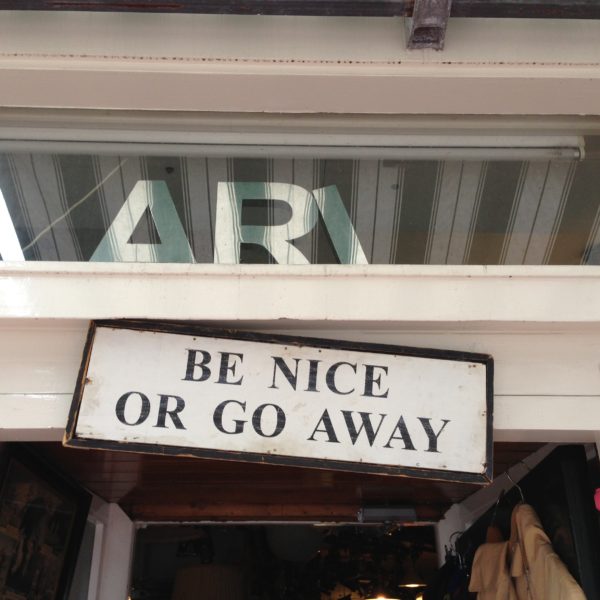